Mount Kilimanjaro was an active volcano in its younger days and is the world’s largest freestanding mountain. This means it is not part of a mountain range, but seems to ‘grow’ from the surrounding plains into a snow-capped peak.

Mount Kilimanjaro is almost on the equator in the northeast of Tanzania in East Africa. It lies just south of the Kenyan border in the Kilimanjaro National Park – the park starts at the 2700m contour. The nearest town is Moshi. The mountain is about 130km from Arusha and just one hour from the Kilimanjaro International Airport. Kilimanjaro-Experience’s trekking office is based in Arusha.

Kilimanjaro is the highest freestanding mountain in the world, but a large part of its appeal lies in its accessibility. You don’t need to be a seasoned pro or at peak fitness to summit, though you will need plenty of willpower. We give you a detailed rundown of what to expect along the way, from your accommodation before you begin, right through every aspect of your experience on the mountain. See what to expect for an initial overview. 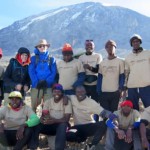 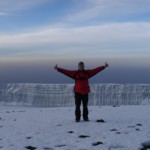 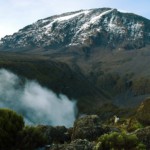 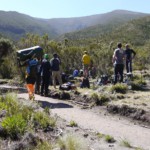 Kilimanjaro is comprised of five distinct ecological zones ranging from lush, humid rainforest to alpine desert and, eventually, the famous arctic summit. As you pass through these different zones, you can see a range of interesting and rare flora and fauna, including colobus monkeys and the endemic impatiens kilimanjari plant. Have a look at Fauna and Flora to find out more.

The mountain is a huge freestanding lump of lava rising from the surrounding plains at 900m to almost 6000m. It was an active volcano, but fortunately for climbers it has been resting for thousands of years. Although Mount Kilimanjaro lies about 330 km south of the equator, it is topped with a lovely layer of snow and glaciers. According to UNESCO reports the mountain has lost 82% of its ice cap since 1912 and 55% of its glaciers since 1962.

Kilimanjaro formed after volcanic eruptions millions of years ago when three volcanic cones were built out of these eruptions: Shira, Mawenzi and Kibo. Shira (3962m) has been eroded to a lava plateau and Mawenzi (5149m) is now a jagged heap of volcanic rock, but lava has formed a ‘saddle’ between Mawenzi and Kibo. The group name for this mass of lava and its three ‘peaks’ is Mount Kilimanjaro. Uhuru peak is the highest the point on the Kibo crater and the highest point in Africa at 5895m above sea level. See Geography for more details. 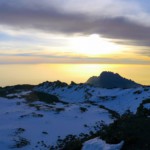 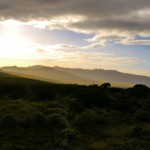 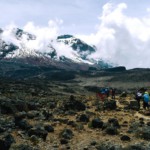 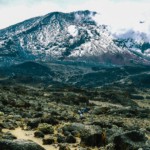 While Kilimanjaro’s geological history can be relatively accurately traced, the origin of the mountain’s name is harder to identify and has spawned a number of theories, while many groups from the region had their own names for the iconic mountain. The first recorded person to stand at the top of the mountain was a German by the name of Hans Meyer, though it is likely that plenty of locals got there before him. See History to find out more.

With so many different climate zones and changes in altitude, the weather on Kilimanjaro can be rather unpredictable. Average rainfall and temperatures vary depending on the season, but at any time of year climbers are advised to prepare for both warm and cold weather, and for rain and dry conditions. See Weather for more details.

There is a lot to consider before embarking on your mission to tackle the Roof of Africa. For peace of mind, we’ll do our best to answer your frequently asked questions before you set off. If you can’t find the answer to your question on our FAQ’s, don’t hesitate to get in touch !

Before you go, watch our exciting videos to help you prepare and fire your thirst for adventure.