How hard is it to climb Kilimanjaro?

When it comes to climbing Africa’s highest mountain, not surprisingly one of the most frequently asked questions is “how hard is it?” It seems clear to me that this question comes up again and again for two reasons. Firstly and most obviously, it’s a key consideration and concern for any prospective climbers as they don’t wants to book, pay all that money and come all the way to Tanzania without knowing what’s in store for them, and how likely they may or may not be to achieve their goal.

But the question also crops up again and again because it’s very difficult to provide what most people would consider as a satisfactory answer. Kili is a strange and unpredictable beast after all. People in their 80s or overweight hikers have summited with relative ease, while professional athletes in their prime have failed to do so.

But speaking in general terms, a large part of Kilimanjaro’s appeal is its accessibility. It certainly isn’t Everest, and there’s no technical gear or experience needed to tackle it. The gradient for most of the climb, whichever route you take, is fairly gentle. While figures vary, it’s generally accepted that more than 70% of climbers manage to successfully summit Kili. At Kilimanjaro-Experience, it’s more like 85% – perhaps the best odds of any operator.

But that’s certainly not to say it’s ever going to be a walk in the park. Climbing this mountain is a task that must be respected and approached with care. Patience, a sense of humour and plenty of willpower will be necessary, and you’ll also need at least a little bit of luck.

Pretty much everyone will feel at least some symptoms of altitude sickness, and estimates suggest that 60-70% will sufffer “strong” symptoms, including vomiting.

There are, however, ways to minimize this. It’s generally accepted that the longer you take to ascend the better, as you have more time to acclimatize to the altitude. This is why we generally recommend the longer routes, such as Lemosho.

It’s also not particularly easy for some people to have to spend so much time without washing or sleeping in a proper bed, so if you’re not someone that likes “rough” camping, chances are you’re going to find it much harder. 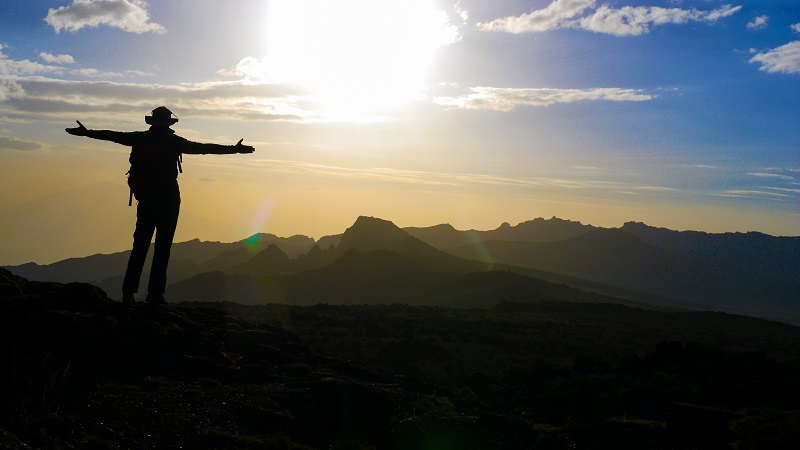 Beyond these general guidelines, I can perhaps add some of my own personal experiences, having summited via the Lemosho Route back in March.

The first two days on the mountain were, essentially, a breeze. The weather was good and the climbing was easy; the landscapes were beautiful and the altitude was not a problem at this stage.

Just when I was beginning to wonder what all the fuss was about, on day 3 we reached the Lava Tower at around 4,000 metres high, and the altitude suddenly began to weigh down on me like a heavy blanket. By the time we arrived at our camp that night, I had a pounding headache and felt absolutely exhausted.

But by the following morning I felt much better and the next day was relatively easy, as was day 5.

Then, finally, the summit night was looming on Day 6. Already at 4,650 metres before we started the summit climb, I was having issues with my breathing as I tried to get a few hours rest before setting off at midnight – every time I began to doze off, my breathing would relax and then I’d suddenly wake up again gasping for more air. I won’t lie: for the first time since we began, part of me thought about turning back at this point – it took a lot of willpower to try to remain calm.

The summit climb certainly proved to be one of the more challenging things I’ve done in my life. Even without the altitude, it’s tough work walking upwards more or less non-stop for six hours in minus temperatures in the middle the night. Three out of the six in our group threw up at least once, and for a while I thought that there was no way that one of our group was going to make it. But he did. We all did, though we were all exhausted to the point of tears.

Just as we were beginning our descent again, I was rather disheartened to see a very portly gentleman marching the last few hundred metres towards the summit as if he’d just been taking a light stroll around his garden.

So overall it remains difficult to give any straightforward and universally applicable answer as to how hard it is to climb Kilimanjaro. It varies from person to person. But as far as I’m concerned, the potential reward more than makes up for any concerns about getting there, and the real thing certainly didn’t disappoint when I finally made it on a perfectly sunny morning.

And when I look back at it all from sea level at home in Cape Town, it somehow feels like it was all rather easy now.